Si comes pescado antes de dormir, tendras pesadillas. (Don’t eat fish before bed or you’ll have nightmares). Ramiro Rodriguez grew up hearing superstitions like this from his relatives that he never forgot. As an artist, Rodriguez felt a connection to the stories of his family which led him to explore the “popular wisdoms” of Mexican-American culture through illustrations. Ramiro Rodriguez’s Sabidurias Populares is a series of prints featured by the St. Joesph Public Libraries as part of this year’s “One Book: One Michiana” lecture series focusing on immigration and Reyna Grande’s book, The Distance Between Us.

Rodriguez told his story at the River Park Library Branch alongside his current portfolio. As the son of Mexican immigrants, Rodriguez was born into a large extended family of aunts, uncles, and cousins living less than a mile away from his home in Southwest Michigan. The Sabidurias Populares series is his dedication to his family and the physical record of his culture that he can share with his children. Each print embodies the spirit of a “popular wisdom” that was passed along from one family member to another from generations of Mexican folklore. While some refer to a haunting presence such as, “Don’t pick up food from the floor because the devil licked it,” others are more of an unfortunate circumstance including “If you cut your hair on Friday, it won’t grow back.”

devil licks at dropped ice cream cone from below

The prints are incredibly detailed with fine lines for tonal value gradations. Each work has a well-balanced use of positive and negative space with black ink on white paper. The prints are created through a process that begins with the memory of a family saying that Rodriguez clarifies in family interviews. Multiple drafts of the saying are composed before a final sketch is drawn on the linoleum block and finalized with a pen to establish defined lines.  The white space of the block is carved away for the remaining raised surfaces to be hand-printed with ink.

The descriptions were carved into the block as part of the overall composition to narrate each scene. Two of my personal favorites involve the slight psychological distrust that could linger from our pets’ behavior when left to their own devices with the following superstitions: ” If you see a dog crap, you’ll get a stye in your eye,” and “If you leave the baby alone the cat will steal her breath.” 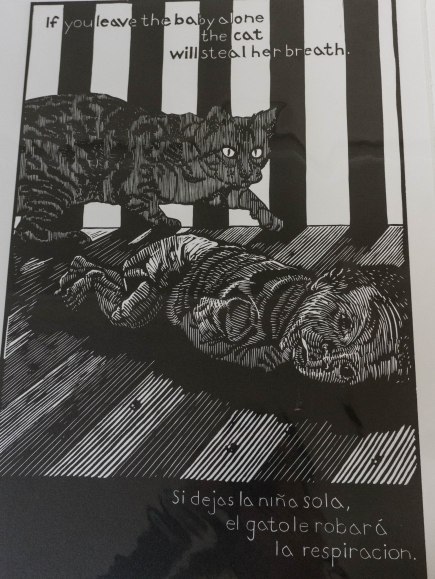 Rodriguez also wanted to represent the stories of how his parents came to this country. He believes that sharing who we are is more important in our society today than ever before when cultural backgrounds are often misunderstood rather than made more accessible to each other for commonalities. The print, La Que Bebe No Vuelve, is one example of carving his living history with the crossing of his mother’s family over the Rio Grande River in the 1940’s when she was a girl.

The prints of Sabidurias Populares were created to document and share Rodriguez’s culture and family history. Each saying remains somewhat of a mystery to him as to how it originated and came to be told. The sayings are amusing, comical, and fascinating personal memories that are both unique to his immediate family and somewhat of a shared culture with other families of Mexican descent. Rodriguez translated what was once an unrelated set of cautionary guidelines into a visual narrative of shared experiences. More of Ramiro Rodriguez’s artwork can be found on his website at http://ramirorodriguez.com/home.html.