Five years ago today, Derek and I started dating just a month before we graduated from Hope College. It was a time of anxious excitement looking for jobs and venturing into a long-distance relationship. Now that Derek is based in Naples for a year-long project, we have had to make do with the travel and distance once again. While it’s a bit of old hat to us, nothing could be better than being able to spend some quality vacation time together while Ashley’s teaching schedule is on spring break.

The trip began Friday after work with a late flight into Orlando where Derek drove the 3 hours to pick me up. I decided to fly into Orlando to be closer to Derek’s parents for a weekend visit at the Tampa Zoo. Orlando is an enormous airport and it took a few text messages for us to finally find each other. Derek excitedly hurried me along with a spring in his step, guiding me to parking so we could visit the downtown area before calling it a night. 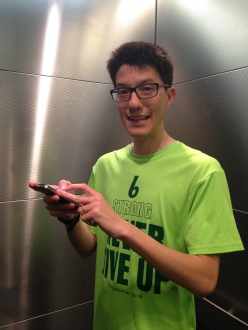 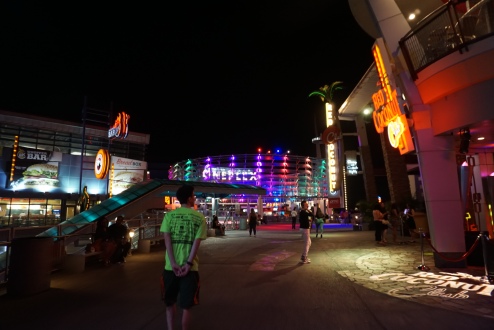 He took me to Universal City Walk at Universal Studios in downtown Orlando. It was an exciting adventure to experience fresh off the plane for one night only in Orlando. Since it was after midnight, there was free parking and no lines to enter the park. The City Walk visitors were dressed up for dancing in the festive nightlife scene but we were interested in something far more enjoyable…mini golf! 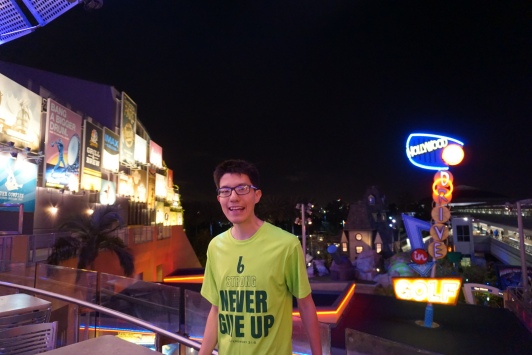 Hollywood Drive-In Golf offered two courses including a haunted mansion and sci-fi course. There was a large group signing up for the haunted mansion, so we chose to play the sci-fi course to prevent waiting at each hole for them to finish. This was one of the most unique places that we have ever played putt putt. Not only was it a glow-in-the-dark course with neon lighting, but each hole had a theme with animated robotic movements. Sometimes we had to hit the ball into a revolving opening or traverse through an alien attack with laser pointers and heavy fog to make our par! 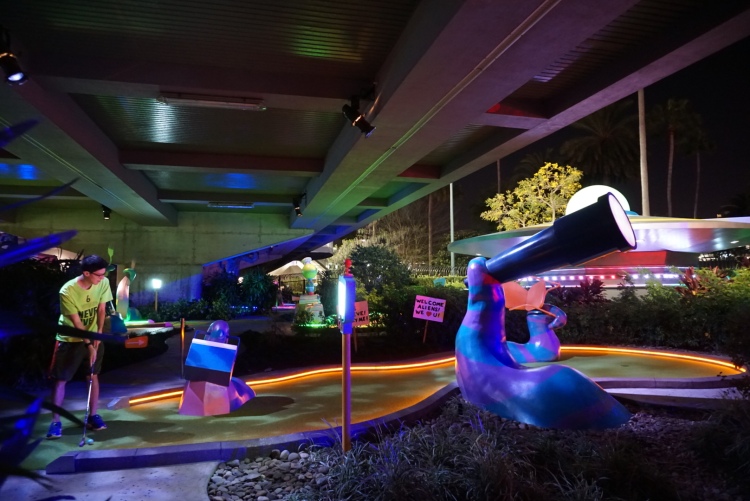 One of my personal favorites was escaping a space ship to continue putting the hole. The course wasn’t too difficult and we got a kick out of experiencing each part of the course. 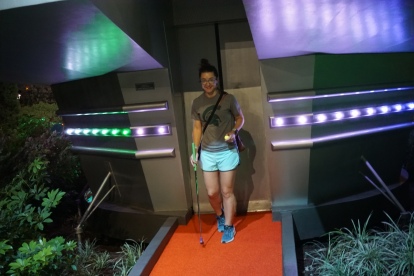 The next morning on April Fool’s Day we drove 90 minutes to Tampa for the day at Busch Gardens. One major discount that we took advantage of was investing in the Tampa Go City Pass which offers a booklet of several attractions for one price. Our tickets alone for Busch Gardens and the Tampa Zoo were far cheaper with the City Pass but we were also able to visit the Florida Aquarium in the afternoon.  If we had been in town much longer, we could have used our City Pass to see the Clearwater Aquarium, Museum of Science, and Chihuly Arts Center.  We definitely reccomend using a City Pass if you plan on visiting Tampa. 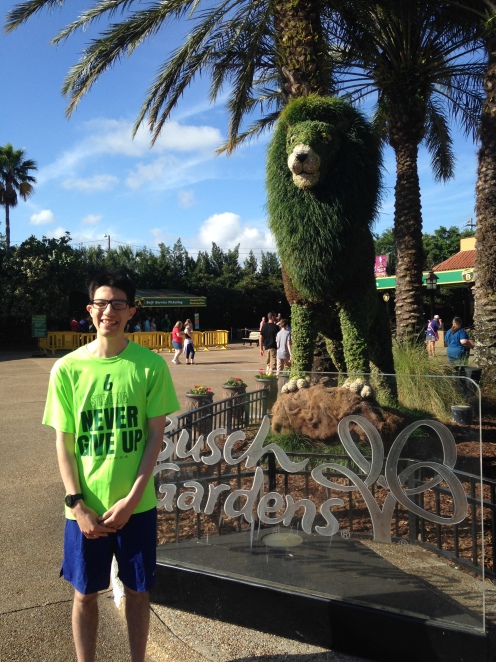 Being regular visitors of roller coaster parks at Cedar Point and Six Flags, we assumed that Busch Gardens would be very crowded on the first Saturday in April. We considered purchasing a pass to skip the lines but opted out when we learned it’s outrageous price. It turned out to be the best decision we made all day because we were able to ride every coaster with less than a 10 minute wait. Our first ride of the day, “SheiKra,” climbed 200 feet before stopping halfway over the edge with our eyes glaring down at the 90 degree drop until it released us at 70 miles per hour! 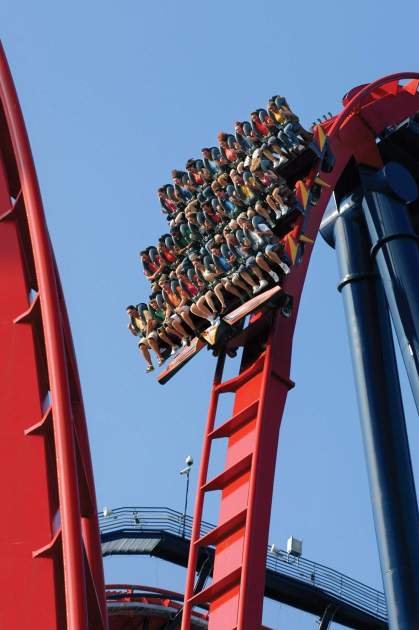 We lined up for SheiKra three times in a row with no wait at all. The only ride that we didn’t have time for was their newest coaster “Cobra’s Curse” which had a 60 minute wait. However, at that point in the day we were too exhausted from the heat and rides to stand in line for one more ride. 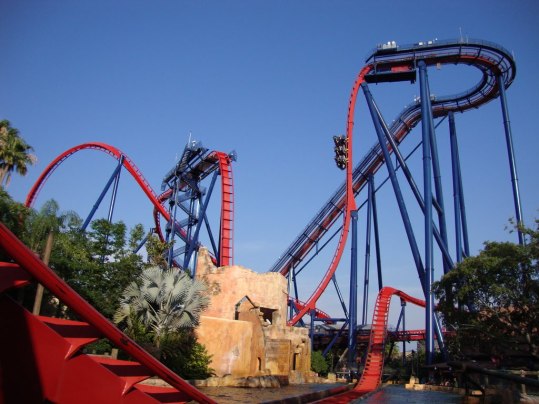 What was so intriguing about Busch Gardens was the variety of attractions that they had to offer. Not only is it a roller coaster theme park, but there are also animals, botanical gardens and bush sculptures. This gave us plenty to do in-between rides by exploring all aspects of the park. 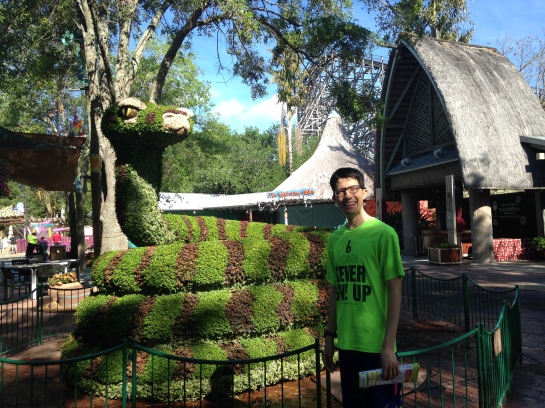 There must be an incredible amount of upkeep for these beautiful sculptures. 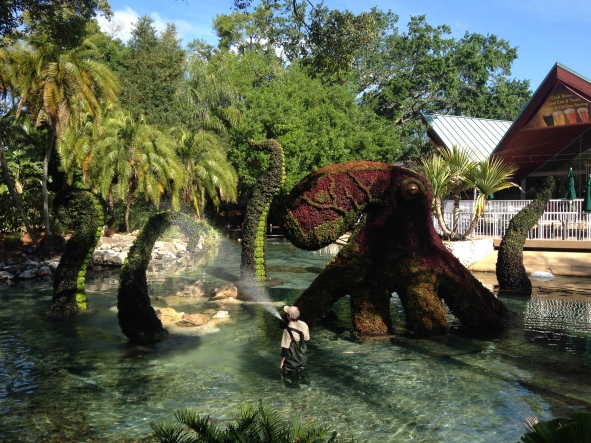 We followed the park’s loop to visit each animal exhibit and roller coaster as we came to it instead of going directly to the rides. 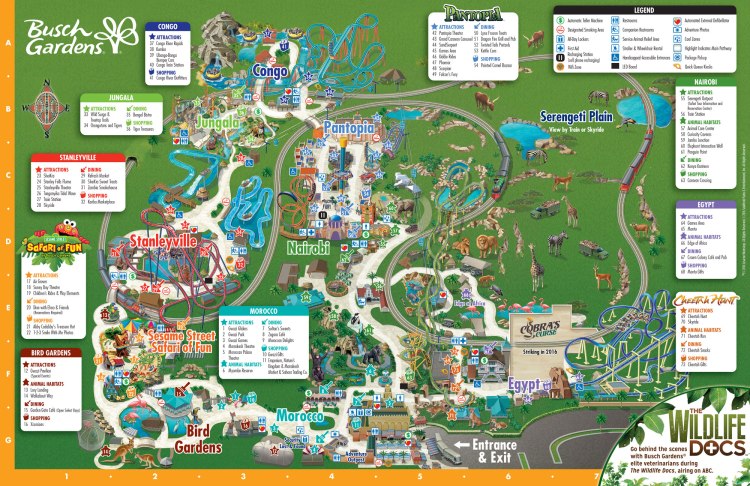 This made it possible for us to interact with many of the animals who were greeting us for feeding times. 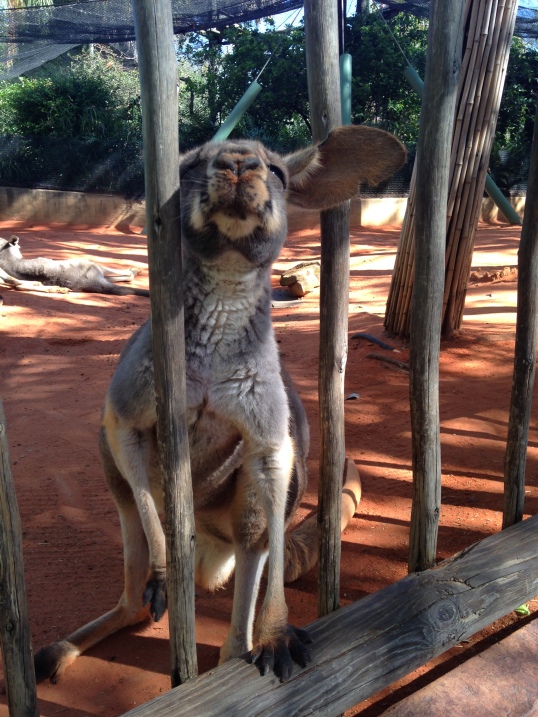 Who knew that kangaroos like cabbage or being scratched in-between the ears? 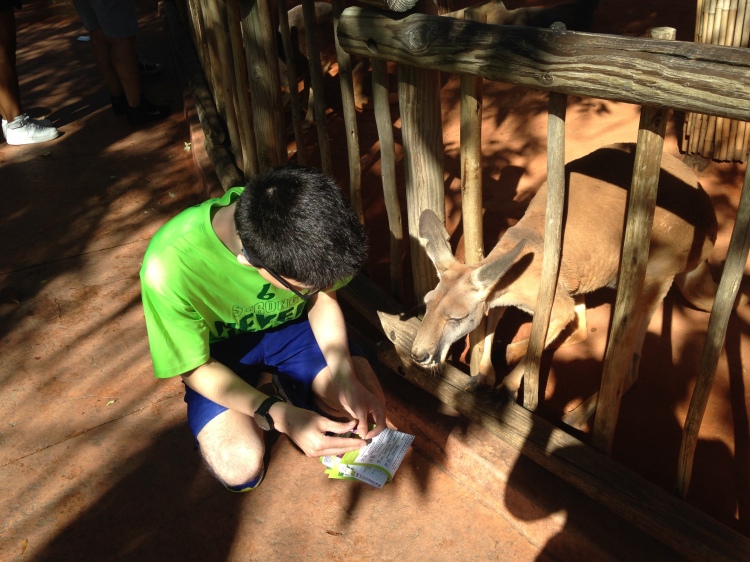 This roo was completely zonked out for a mid-morning nap in the sun! 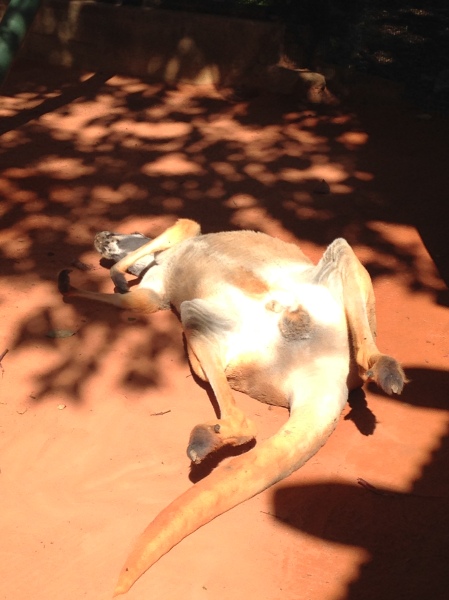 This living sculpture “Darwin the Orangutan” is planted with grass fur made of bronco sedge, coconut fiber, and reindeer moss. 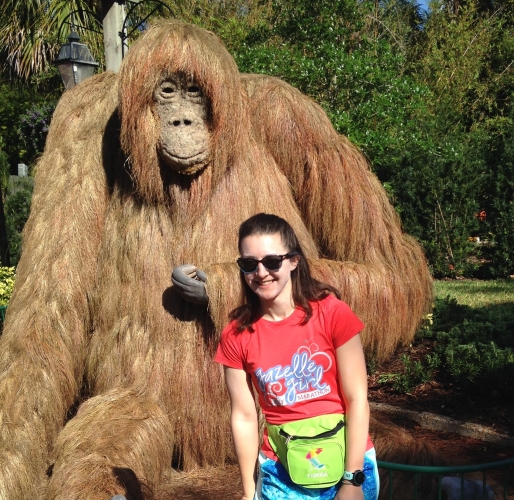 More highlights from the exhibits at Busch Gardens: 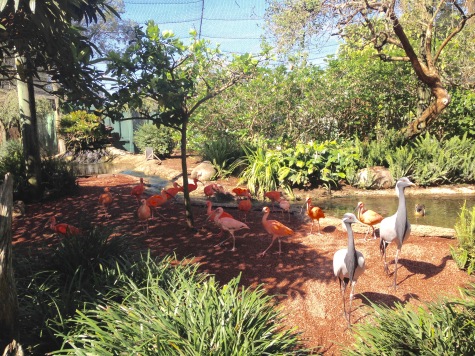 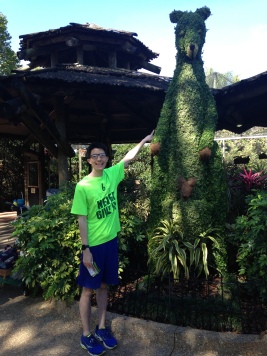 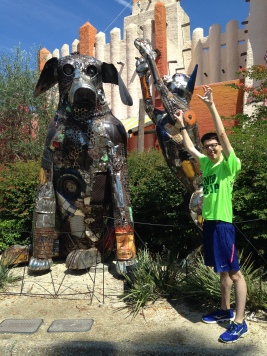 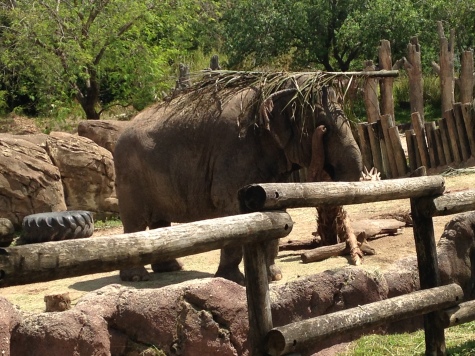 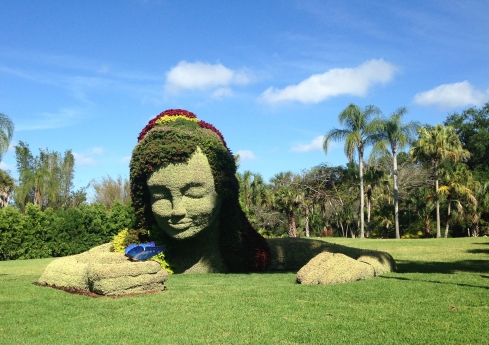 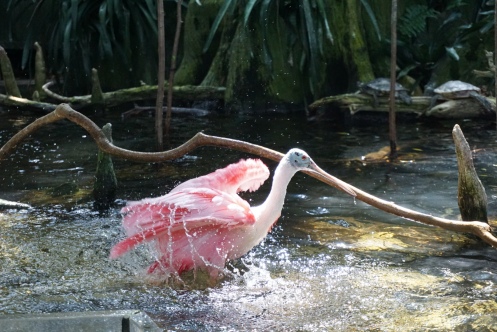 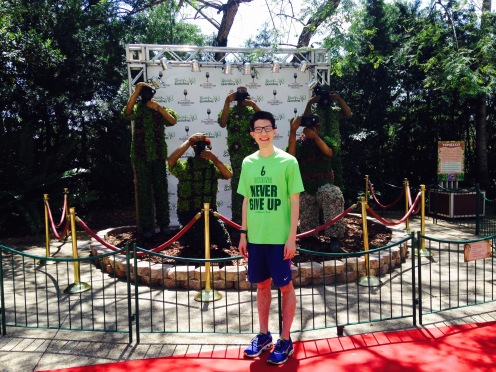 When the heat got to us, we used our city passes to visit the Florida Aquarium in downtown Tampa. As we made it into town, giant cruise ships blew their horns to signal their departure. We splurged on sharing a small treat of dippin’ dots ice cream and bottled water to start our visit. While much smaller than Chicago’s Shedd Aquarium, it was just enough for us to see in an hour or two before they closed. 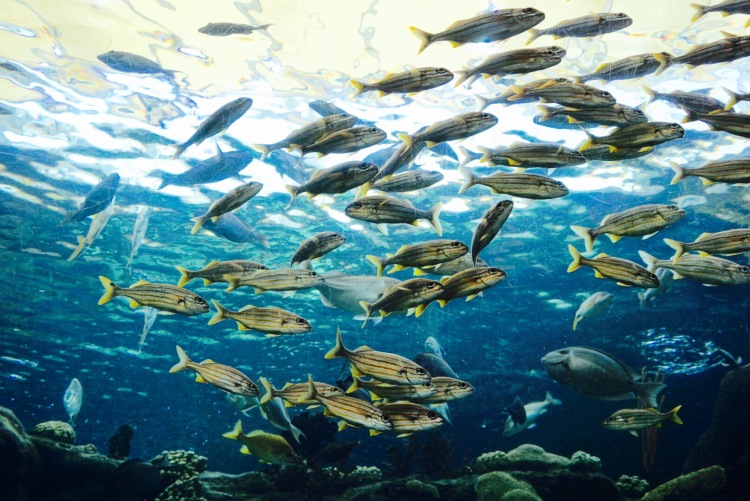 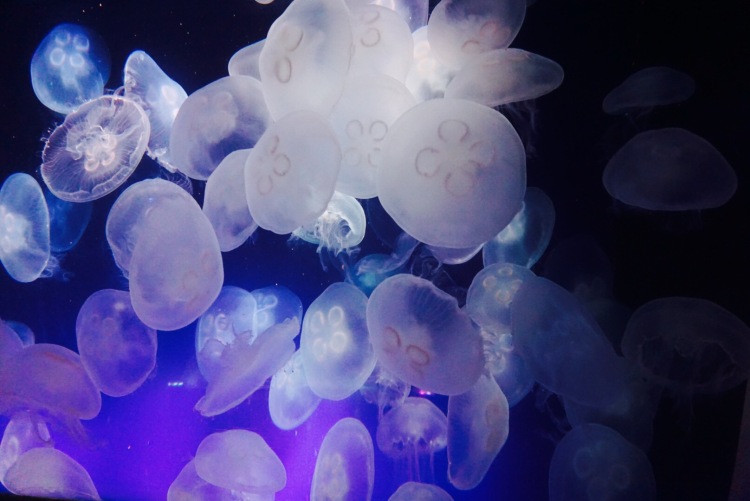 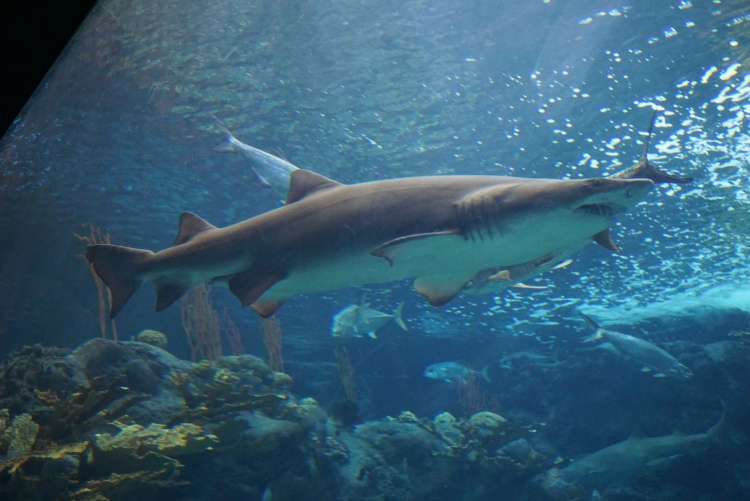 This mammoth fish is an Atlantic Goliath Grouper named Cleatus who is 28 years old, weighs 300 pounds, and spans 5’10” long with a 51″ girth. 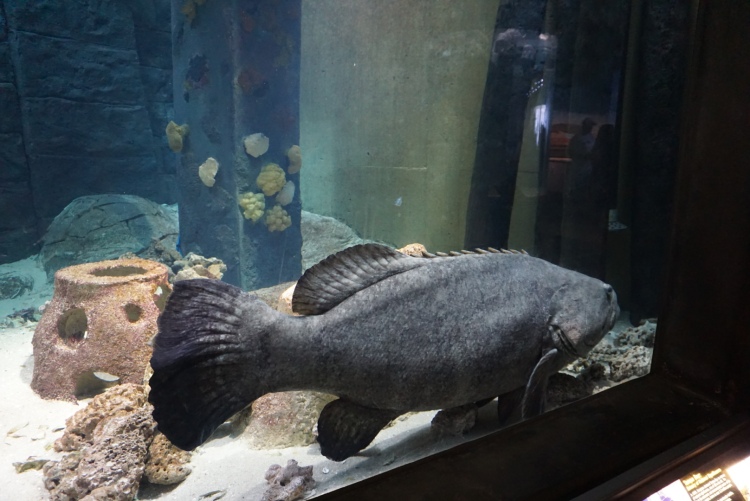 Our first encounter with petting a sting ray, which we were able to do at the Tampa Zoo the next day as well. 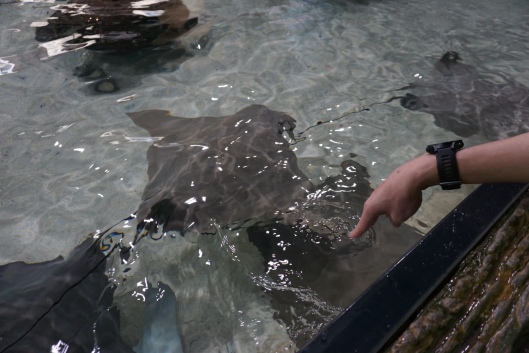 This beautiful lion fish is an invasive predator on the Florida wildlife. Originally an aquarium showpiece, they were released into the ocean over time when no longer wanted and have significantly diminished ocean eco-systems and commerical fish species. Since they are not native to the Florida habitat, they have no natural predators and prey on virtually everything. The Lionfish also has eight venomous spines along its body making it very dangerous to divers  and fisherman. 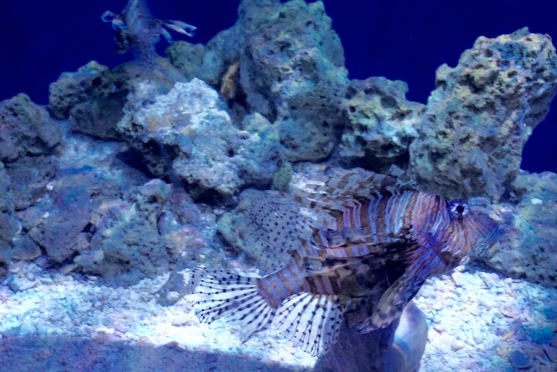 We called it a day with our mini-vacation in Tampa on this most enjoyable of days on April Fool’s. Yes, I wore a fanny pack to ride the coasters without checking a locker. 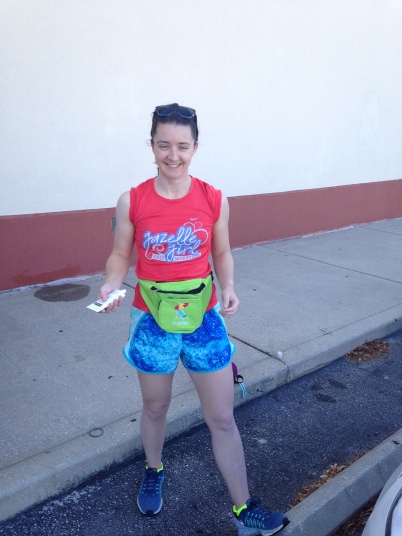