The artist cautiously drapes a paper-thin strip of clay across the chest and wraps it around the body, smoothing edges with the tip of his metal tools.  Too much pressure and the folds will blend, smudging minute details and too little the wrappings may not stick together at all. Operatic chords blast from the room as the mad scientist perfects his own version of Frankenstein. It’s mid-April but today it feels more like Halloween as Derek creates a mummy of his own masterpiece out of thin air.

Little known to many, Derek has a certain stroke of creativity and curiosity that he dabbles in with polymer clay. His sculptures may begin on the whim of his fancies but progress over hours of careful work. While Derek has many ideas that he springs into action, one of his inspirations is the work of an artist who goes by the name, Ace of Clay, who laid out the structural steps for this sculpture.

The mummy began as a spool of wire that was twisted and bent into the shape of a skeletal figure. The wire bones were fattened with aluminum foil to form the three-dimensional body and then covered in polymer clay. The mummy was a flexible form and needed reinforcements to maintain stability. The ball of aluminum that consisted of the mummy’s head wanted to slide right off the body and needed extra clay around the neck to sit at a slight angle atop the shoulders. 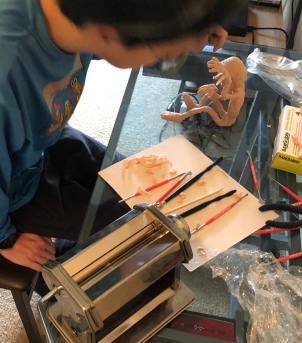 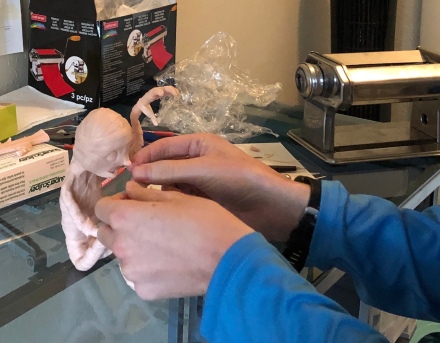 Once the clay body had structure and form, Derek experimented with poses for the final piece. He settled on a seated position for the mummy that appears to have just woken up from a very long nap from six-feet-under. I imagine the zombies of Thriller busting out of their graves and stumbling to their feet with tattered clothing much like the mummy stretches forward with unraveling bandages. 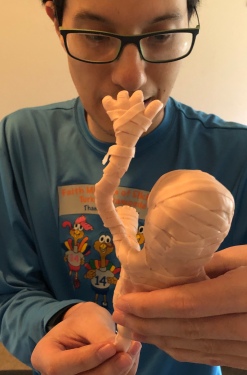 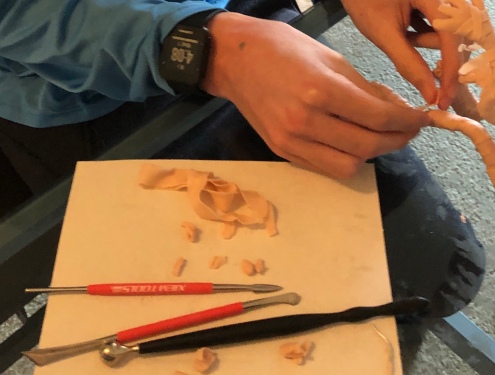 Each line of cloth has been rolled and pressed as a long, fragile strip of clay that Derek wraps around the appendages with a delicate touch. Some pieces rip apart in two and need to be reformed and applied to the body in the layering process. Tiny notches are carved into the strips to portray aging and some strips are draped loosely as if sliding right off the mummy’s arms.  Eyes, wrinkles, fingers, and toenails are sculpted until the mummy looks just right. 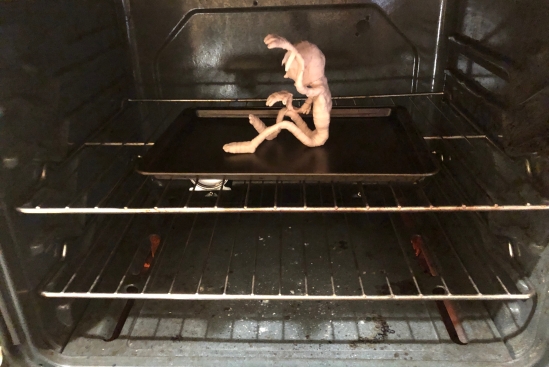 The oven is set to 275 degrees Fahrenheit and the mummy awaits his revival as a fired ceramic sculpture. After roughly 20 minutes in the heat, his once squishy arms can be tapped on the table like the brittle bones he represents. After he has cooled, the mummy gets a fresh coat of acrylic paint with two base layers of grey with the help of the artist’s trusty sidekick (Ashley). A watered-down dark grey is washed over to fill in the creases of the facial features and the cracks in the fingers. Highlights are surfaced with a light grey dry brush technique and the eye ball is painted pure titanium white. The mummy’s bandages are aged with a dark wash of watered-down black paint and then a white dry brush is lightly applied. The mummy slowly comes to life, layer by layer in the painting process. 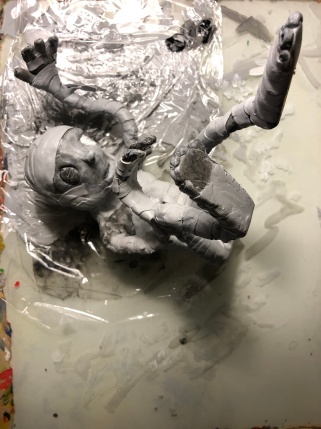 After a few finishing touches in paint, the mad scientist-artist has completed his mummy masterpiece. The mummy perches on the bedside table with a demented look out of the corner of his good eye. While he rests there all day, the mummy comes to life at night when the dark reveals a spotlight from the lamp above illuminating his decrepit remains. There’s one final task for the creator to reveal and that is the name of the mummy that Derek has created: “Mr. Bo.” 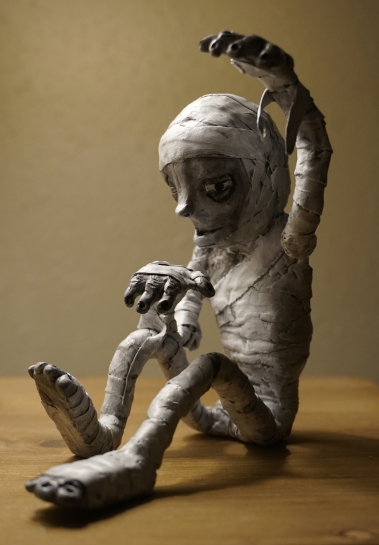 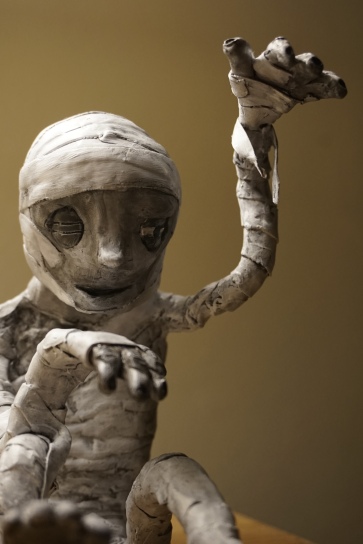 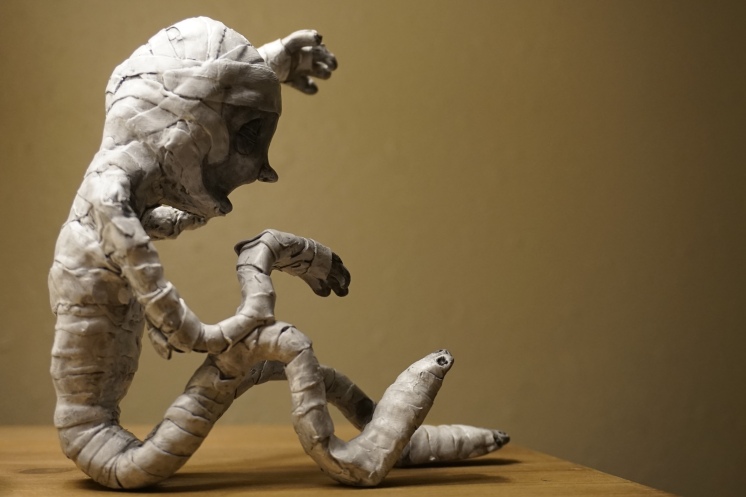 One thought on “The Making of a Mummy”