As far as the eye can see, all around us are oddly symmetrical mounds of earth. Now covered in wildflowers, this dimpled landscape of mounds, each measuring about six feet tall and thirty feet wide over several hundred acres, looks like it could be something crafted by science fiction.  According to Washington’s Department of Natural Resources, scientists have researched that the unusual black soil was formed by ice-age glaciers that mixed melted ice and stone into a dark, gritty soil combination, but there have been no proven conclusions to the origin of the mounds. 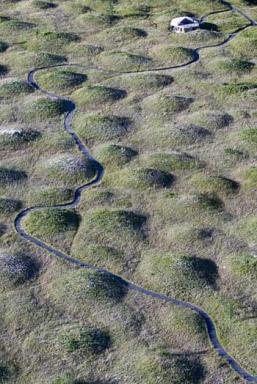 Visitors have been puzzled for centuries by their origins with many proposed explanations. The Upper Chehalis Tribe told a folktale of a tribal woman named Thrush who refused to wash her face for fear of causing harm to the Earth. The people harassed her into bathing until she finally gave in, causing rain that flooded the prairie into the shape of waves. In 1841, an explorer of the Northwest, Captain Charles Wilkes, discovered the mounds that he believed were graves of local tribes so he dug up a few only to find rocks and soil. In 1942, professors Walter Dalquest and Victor Scheffer of the University of Washington agreed that pocket gophers created the mounds but this hypothesis has not been proven including with which came first, the gophers or the mounds?

Other hypotheses state the mounds were formed by shock waves caused by earthquakes, ancient flooding, erosion, or permafrost cracking that wedged glacial ice into the cracks of the thawing ground leaving the soil mounded when melted. Despite these plausible reasonings, the Mima Mounds are still somewhat of a mystery to scientists. While the nature preserve is a beautifully interesting place, the one flaw in a visitor’s enjoyment is the adjacent shooting range. The Mima Mounds visitor signs informed us that we were out-of-range from their neighbors, but it was slightly disturbing to hear gunfire surrounding us while strolling the open prairie. A curious deer popped its head out from behind a mound as if to say, “I’m protected here,” on this mysterious land of peculiar mounds.