We enter the Hall of Moss where velvety green giants drape over our heads and cover the forest floor with a blanket of sprouts. Now that we’re away from the crowd our steps lighten as we slowly scan the scene for animals among the world of green. Derek takes his time with his binoculars tilted upward searching for movement among the treetops. We haven’t gone very far when he stops in his tracks and urgently motions for me to join. He extends an arm to a spot that I most certainly cannot see in the moss-covered branches. He whispers with haste, “Look! An owl!” I follow the invisible beam from the tip of his pointer finger to a glorious bird with rings around its eyes staring us down. I frantically capture the creature with several photographs and we lock eyes with the owl who holds its pose. As people approach us along the trail, Derek spends the next ten minutes assuming the role of a bird guide to everyone who follows directing their attention to the owl in the tree. “The kids can only look at trees for so long,” he says to me, “I wanted to show them something they’ll remember.”

Visiting a temperate rainforest, I expected spontaneous downpours and wet footing through a muggy swarm of mosquitos. While the Hoh Rainforest receives up to twelve feet of annual precipitation, we experienced an afternoon of sunshine with moderate temperatures shaded by the canopy above. The trees twist in otherworldly ways with layers of moss draped from branches to the fallen “nurse logs” below that host young tree sprouts between their crevices. As we made our way through the hallowed Hall of Moss, we noticed fellow birders paused with eyes directed above. “We’re listening for bird calls,” they say. Excited to share our new discovery we show them our owl photos that they identify as the Barred Owl with their field guides. When I stop to think about the Hall of Moss, my sense of wonder grows with the grandeur of the rainforest. 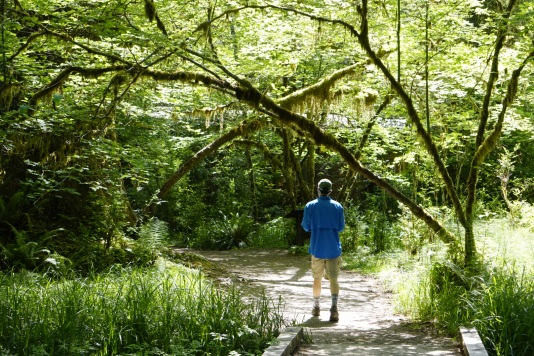 2 thoughts on “The Hoh Rainforest”