Originally posted in the Summer of 2017:

Just days before the race, we got an invite for a team entry into the Amazing Elkhart Race from our friend, Paula Turk, of Stone Soup Promotions. Another team signed up but wasn’t able to compete so she offered their entry to us. We were able to rally up two of our running friends, Dan and Brenda, who were willing to join us for the Amazing Race as “The Four Clovers.” With just three hours on the clock, teams of four people had the adventure of traveling to destinations throughout Elkhart to compete in twelve challenges of strategy, fitness, community service, and pure fun.

Elkhart’s Amazing Race is inspired by the CBS reality television show “The Amazing Race.” Contestants enter the race with a partner and must book flights to foreign countries, run the streets of unfamiliar cities, and complete challenges specific to local customs. Activities could be dancing in costume, playing the bagpipe, yodeling a tune, driving a stick shift, eating a rotten egg, navigating a maze, carrying mugs of beer, or zip-lining through a forest. The last team to finish each country’s leg of the race is eliminated from the show until one final team beats the competition to win a million dollars. 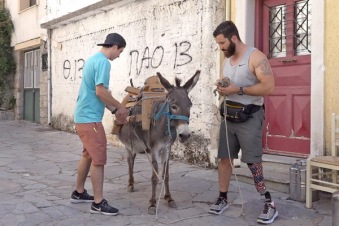 The Elkhart race kicked off with all teams finishing their first obstacle at once before checking in with the judge for our passports. A golf ball was put into each leg of a pair of brand-new pantyhose with the goal of knocking down four water bottles with just the use of your head. Each team member had to knock down the bottles before we could move on. 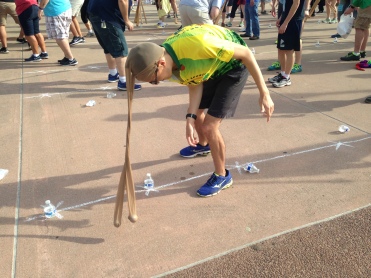 We received a book of addresses and hopped into Brenda’s truck while Dan navigated the streets closest to our destinations.  Our first stop was to Church Community Services, where we stained blocks of wood for Christmas decorations and sorted expired goods from donation boxes.

At the Pierre Moran Library, Ashley had to rap to Dr. Suess’s “Green Eggs and Ham” dressed as Cat in the Hat while the team raced around the block. 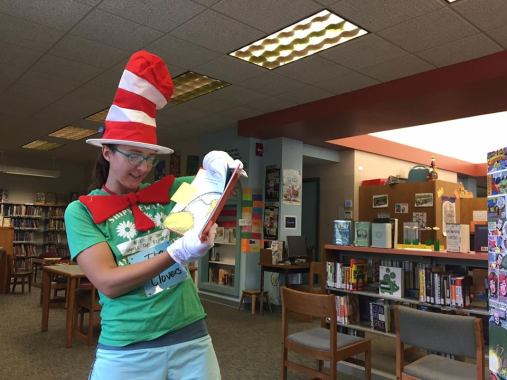 Our challenges varied from physical and strategic feats to acts of community service including untangling hangers at the Shepherd’s Cove Clothing Pantry, each time scoring points in our passport. 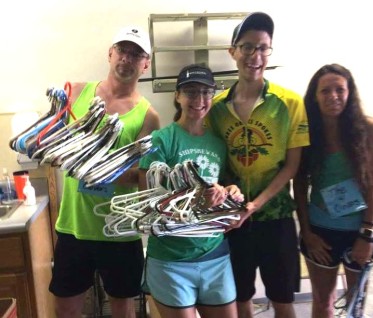 At the Baker’s Nook, Ashley had to decorate a cookie with her opposite hand and then eat it out of Derek’s hand. We also did a circuit of push-ups, crunches, and burpees at the U.S. Army Reserve. Along the way, we took selfies with 15 of the Quilt Gardens’ statues positioned around the town for an additional 500 points. 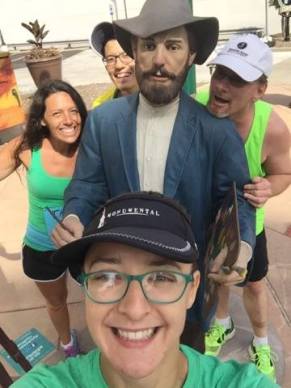 One of the many highlights of our day was visiting an Elkhart Fire Station where we put on portions of firefighter suits and hosed down a trash can. 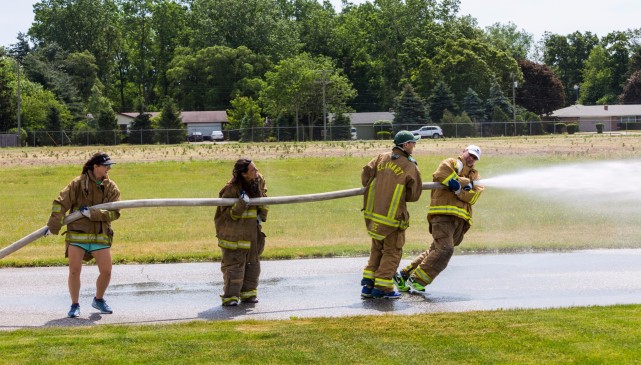 We had just enough time to complete all but one destination before checking in to the finish line to tally our total points.

The Four Clovers scored 2nd place overall in our category with each of us winning a $25.00 gift card to Martin’s Supermarket.

It was an exciting day for us to participate in an adventure race and be able to contribute to the fundraiser for Church Community Services, a nonprofit organization providing food, financial services, and empowerment programming for the local community.

One thought on “The Amazing Elkhart Race”