How does Alexander Hamilton, a Founding Father in U.S. History become the inspiration for a hip-hop musical on Broadway? The face of the ten-dollar bill, somewhat forgotten, reappears with fresh words as the narrative of an orphaned immigrant who overcame adversity and joined a revolution to build a new nation. Lin-Manuel Miranda recognized the attributes of Hamilton’s brilliant determination and self-destructive personality as parallels to the life of a rapper like Tupac who wrote intricate, socially nuanced lyrics. As Miranda read the pages of Ron Chernow’s biography, he imagined the characters in Hamilton’s life as agents of change disputing at cabinet meetings with the energy of rap battles in his own vernacular. What began as a song for a hip-hop album at a 2009 performance for newly elected President Obama, transformed into a six-year journey of research as Miranda composed the musical that he would perform as the star “Hamilton” with the original cast in New York City.

Left: Miranda as Hamilton in his book, “Hamilton the Revolution,” Right: Miranda in LA, Photo by Kevin Winter/Getty Images

Hamilton: An American Musical is “a story about America then, told by America now,” Lin-Manuel Miranda states in his book Hamilton the Revolution written with Jeremy McCarter, a theater critic who was involved in the project from its early beginnings. The events of young rebels unfolding in a Revolutionary War are told in the present tense through the lens of Alexander Hamilton, a poor kid from the Caribbean, who rose in his station by fighting the British, defending the Constitution, and helping to define our identity as Americans in the United States.

The musical is entirely sung-through with rap, hip-hop, and R&B ballads instead of a traditional scene-song-scene format. The moment the house lights dimmed, our narrator, Aaron Burr, began to rap lyrics with no need for an overture. The actors were dressed in parchment-colored period clothing void of the powdered wigs, only adding color when characters distinguished themselves as influential to the plotline. Wooden beams and staircases portrayed a local tavern or town square for the show’s entirety. Without dramatic scene changes, the emphasis was on the raw talent of the performers.

The language of a revolution engaged the audience that clung to each word as Hamilton rapped in the refrain, “Hey, yo, I’m just like my country/ I’m young, scrappy, and hungry/ And I’m not throwing away my shot.” The leading ladies of Hamilton also commanded the stage in “The Schuyler Sisters”  as independent women fully engaged in the making of history with these words: “I’ve been reading Common Sense by Thomas Paine/ So men say that I’m intense or I’m insane/ You want a revolution? I want a revelation/ So listen to my declaration/ “We hold these truths to be self-evident/ That all men are created equal”/ And when I meet Thomas Jefferson/ I’mma compel him to include women in the sequel/ Work!  Artistic director Oskar Eustis of Public Theather in New York City, said that “Lin does exactly what Shakespeare did… He takes the language of the people, and heightens it by making it verse.”

History can look very different based on who is telling it. The casting of Hamilton welcomed diversity with lead characters such as Thomas Jefferson, Alexander Hamilton, and George Washington played by Black and Latino actors. Lin-Manuel Miranda defended casting multi-ethnic actors on the basis that the best people able to perform his style of songs may look nothing like their historical counterparts and should not be dismissed because of their skin color. With 13% of our country foreign-born, Americans will only become more of a vibrant blend of colors instead of distinctly separate majority and minority races. The actors paused when the crowd cheered during the song “Battle of Yorktown (The World Turned Upside Down)” when Hamilton and Lafayette turned to each other and said, “Immigrants. We get the job done!”

As Miranda was composing Hamilton he consulted with Ron Chernow the author of Alexander Hamilton’s biography as a fact checker because he wanted historians to take his work seriously. Chernow himself became an advocate for Miranda’s poetic storytelling with the belief that any race can play the Founding Fathers, some of which were known to be slaveholders. Miranda makes reference to this during a cabinet meeting when Hamilton addresses Jefferson with “Hey neighbor/ Your debts are paid cuz you don’t pay for labor…Yeah, keep ranting/ We know who’s really doing the planting.” As a result, Americans can lay claim to our country’s history and rewrite our future for a diverse generation as defenders of the marginalized. Hamilton delivers a message of an underdog nation of immigrants that defeated a global superpower. These young rebels defined our country’s foundation with the U.S. Constitution and Bill of Rights for the liberty of its people. The fight is not over for us today in wake of a fragmented political landscape debating over immigration and regulation of arms with reoccurring mass shootings. Hamilton becomes more than entertainment by being able to tap into the significance of current events from the standpoint of ragtag colonies fighting for liberty and independence.

While tickets are hard to come by, Hamilton expanded its audience to the New York Public Schools through a Rockefeller grant in 2016 allowing 20,000 students from schools with a high-percentage of free and reduced lunches to see the show for $10.00, or an Alexander Hamilton, each. Public Theater, which first opened Hamilton in 2015, has also established a partnership with the Theater Development Fund (TDF) to bring NYC students to musicals since 1995. When TDF school groups saw black actors cast as Founding Fathers one of the students said, “It just made me feel really proud, and feel good about being American. Like I belong here.”

It seemed like an effortless connection to relate to the characters of Hamilton as real people working their way through difficult times. We laughed along with King George III as he pouted that the Americans had been freed and rooted for Hamilton when he challenged opposing opinions in cabinet battles. There were sniffles in the audience when Angelica Schuyler was torn with a broken heart at her sister’s wedding banquet and light sobs when Eliza Hamilton mourned the death of her son after a duel. Hamilton: An American Musical is a once-in-a-generation experience that illuminates a story worth telling as we contemplate our country’s origins in juxtaposition with history in the making. 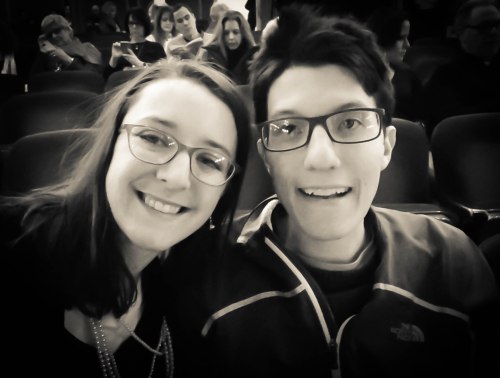 Derek and Ashley Jager at the CIBC Theater in Chicago, IL

One thought on “Hamilton: A Story Worth Telling”