It was as if we were walking in place. The wind cut through us, all limbs scrambling forward just to make it another block. I pinched my hood underneath my chin to keep it from brushing back, fighting the gusts of wind that swarmed the streets. We snuck into a bakery for a few moments before facing the music again. It would definitely have to be another indoor day. What we didn’t realize at the time was how memorable this day would be.

Of all the art, science, and history museums that we have visited, nothing has come close to the impact that the 9/11 Memorial Museum had on us. I’ve always been fascinated with how history shapes the world and what life might have been like for the people living through historical time periods. This was different because I was in the 7th grade on September 11, 2001 watching the events unfold as they happened on the TV screen during my school day. Our world has a heightened level of security, violence, and cultural misunderstanding that has rippled for years on end from the trauma that so many of us witnessed on that day.

Ground Zero is the first place we visited the night we checked into our hotel. There are two rectangular pools positioned where the twin towers once stood.  At night, the space is quiet within the empty void of each foundation where the water gently slides underneath. I found myself staring into the deep just like I do when gazing into the inner flames of a campfire. It is a dark pit with a haunted beauty. I closed my eyes and breathed as the sound of the fountains rushed underneath while my fingers surfaced the names engraved into the stone’s ledge. Some names had a single white rose tucked into their the letters, recognizing that today was this person’s birthday. 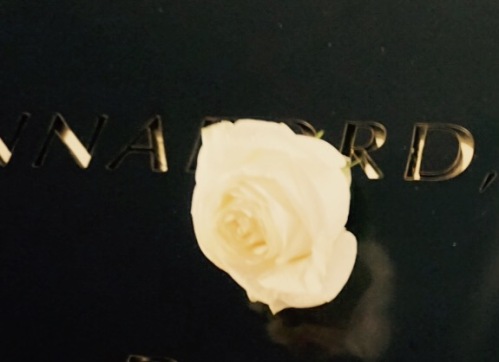 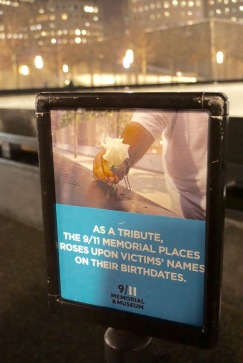 The National September 11 Memorial Museum at the World Trade Center was built to bear witness to the terrorist attacks of 9/11/01 and 2/26/93, honoring nearly 3,000 victims and those who risked their lives to save others.  It also recognizes the stories of those who survived and how others responded with acts of compassion. Despite the consequences these tragedies caused on individual lives and communities throughout the world, we can rise above and triumph human dignity over depravity for the fundamental value of human life.

We revisited the 9/11 Memorial site on Christmas Day when the wind advisory was too much to bear. When arriving at the museum, we picked up our tickets in the line outside and then entered the security scan similar to TSA airport protocals requiring us to remove belts, coats, and bags for the X-Ray belt. Armed guards patrolled the area for additional security. Once we had passed through, we dropped off our coats at the complimentary coat check and checked in with the information desk to purchase audio guides. The guide is a self-directed tour narrated by Robert De Niro of the museum experience. Guides are available in American Sign Langauge, Audio Descriptive Serices, multiple languages, and a version for children and families. You can download this free app on your smartphone for iOS and Android but we rented the guides to save the battery life and Data plans of our own phones. The guide not only describes museum artifacts but also includes audio recordings of personal stories. I can’t imagine visiting the museum without the guide because it was so impactful. 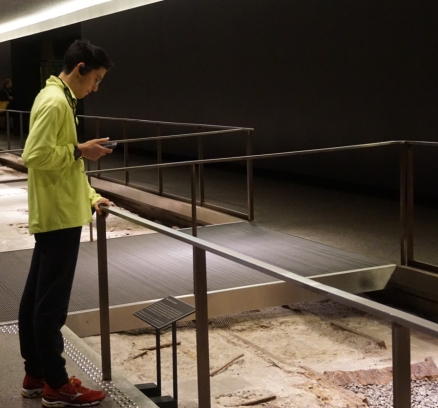 We walked down the ramp into the underground museum listening to De Niro’s introduction and stopped at the photo of the New York City skyline taken at 8:30 am the morning of 9/11/01. 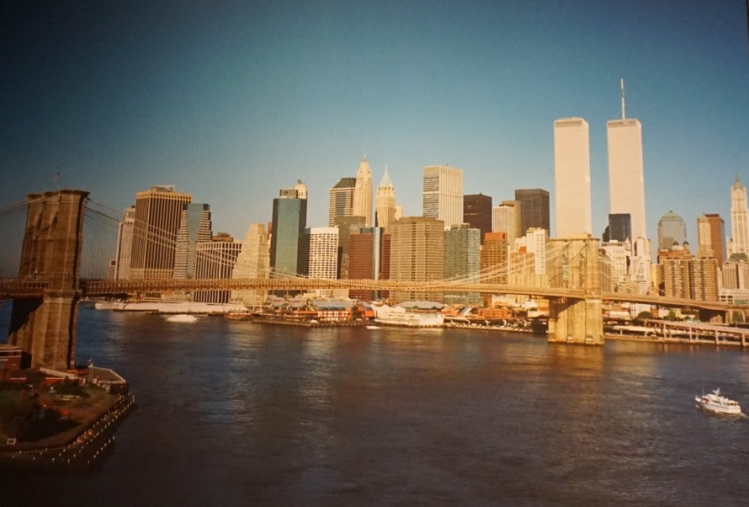 At the end of the ramp we stepped onto a descending escalator next to the “surivor’s steps,” an unobstructed exit to the street level that hundreds of people ran down to escape. 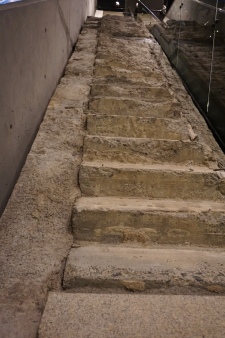 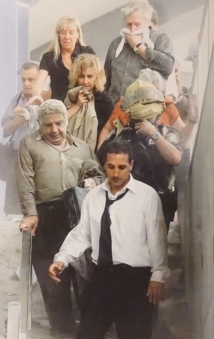 The guide led us through existing remains from the building’s structure and foundation including twisted beams, crumbled pillars, and mangled firetrucks. Colonial era artifacts were also discovered in 2006 by forensic anthropologists digging below the wreckage for victim remains. Much of lower Manhattan was built atop a landfill and this evidence predates the Revolutionary War.

Artists from around the globe also responded with artwork reflective of 9/11 including a children’s mural, collections of personal items left at memory sites, and 3,000 individual paintings made by Manju Shandler in memory of each of the victims.

This painting below symbolizes the gift of cows to the United States by the Maasai people of Kenya. Living in a remote region of Eastern Africa, the people did not learn about the 9/11 attacks for months. A Maasai student attending the University of California witnessed the attacks during a visit to New York City and then told his community when he returned home in the spring of 2002. The people offered 14 cows to the U.S. as a gift of compassion and a sacred symbol of life. The U.S. Ambassador accepted the gift on behalf of the nation and determined that the herd would be cared for properly by the people in Kenya. Two identical paintings were created to commemorate the gift-one for Kenya and one for the United States.

The most reflective part of the museum is “In Memoriam,” a sacred space dedicated to remembering the lives of the people we lost.  There is no photo, video, or audio recording allowed of any kind here. Every person’s photo is displayed on the wall and touch screen tablets allow visitors to search any name to look up photos, personal stories, obituaries, and relics from people’s lives. This is where 9/11 feels hard to believe. That your sister, father, neighbor, coworker is no longer here and we are here to remember them. One story that was hard to take was a stuffed bunny sewn from the interview dress of a college graduate who was just two weeks into her first job made by her mother.

“September 11, 2001” is the historical exhibition that explores the days events, what led up to the attacks, and the immediate aftermath. Images, video, and audio recordings from that day are shocking to experience. This section of the museum was very crowded, even on Christmas Day. There was only so much of this that I could really handle when I saw video of firefighters running into buildings and heard voice messages of Flight 93 passengers calling their loved ones to say good-bye and let them know that they were going to stop the terrorists from completing their plan. However diffficult this can be it is still evidence of what really happened in our living history and not just something in the distant past that not everyone can relate to.  It has forever changed how we think and feel. 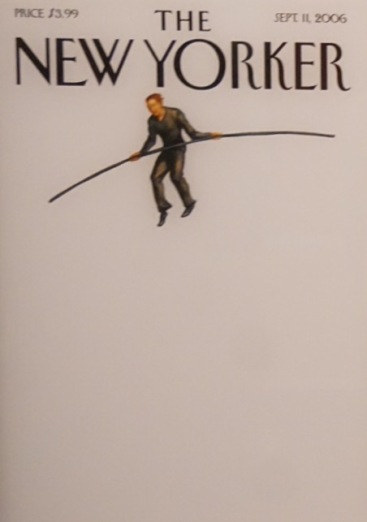 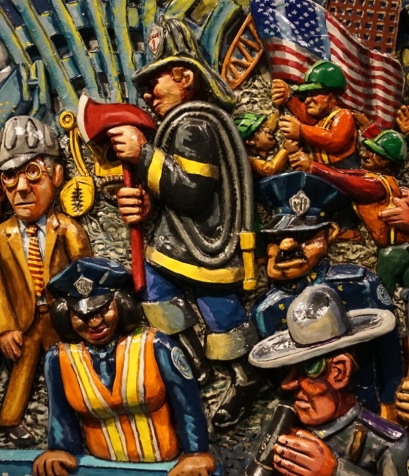 The One World Tower has since been constructed next to Ground Zero. A new subway station is currently being built to exit into the Oculus transportation hub and shopping mall at the World Trade Center. We can only move forward and live a life that is full for as long as we have on this earth while still remembering the events that have shaped who we are.

One thought on “The Christmas that took our Breath Away”

My Tweets
Join 107 other subscribers