Our first day in New York City and it is pouring down rain. The umbrellas were the last items packed in our suitcases “just in case” we might need them. I had no idea how much we really would. We are pretty hardy people (to a point) and we were not going to let the elements keep us in our hotel room all day. In preparation for our trip plans, we checked out a few guidebooks from our library.  National Geographic’s “Walking New York: The Best of the City” lays out the neighborhoods with suggested highlights within close proximity to each other. It was small enough to stuff into a coat pocket so we brought it with us to revisit throughout the day. The DK Eyewitness NYC guide is a thicker hardback with more of an encyclopedic overview but its laminated double-sided street map with subway lines was like a golden ticket to bring along separately. I used this map much more often than the Google Maps on my iPhone. It also was immune to the fleeting battery life that comes with heavy-use electronics. 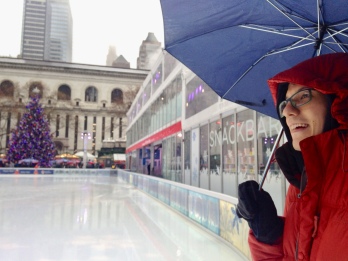 The first walkable neighborhood we visited was Greenwich Village with its eclectic coffee shops, bookstores, and restaurants. Greenwich is known for its LGBT friendly community and colorful flags lined the streets.  We took the red line subway uptown from South Ferry to The Villages were we entered into Village Square and saw a famous George Segal sculpture known as the Gay Liberation Monument before continuing down 4th Avenue near the NYU campus to Washington Square. 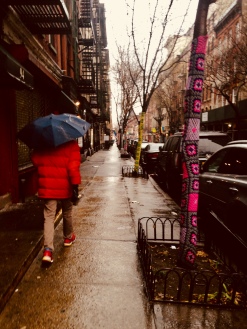 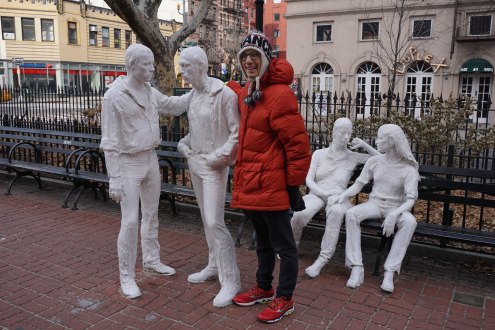 The Washington Square Arch is an impressive marble monument built in 1892 that replaced a wooden arch made in 1889 to honor the centennial of President Washington’s inauguration.  A tour guide was describing the arch and the featured artwork within the arch to a group in French when we walked by. The pouring down rain and heavy wind was starting to get to us so we burrowed underground to take the subway to the historic Grand Central Station. 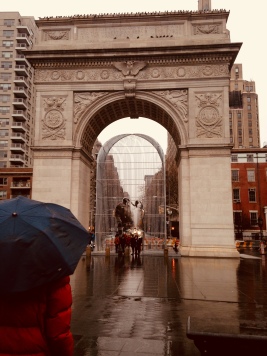 After admiring the interior architecture of Grand Central Station we exited the busy terminal to 5th Avenue’s NYC Public Library. The library offers free daily tours at 11:00am and 2:00pm so we met with a volunteer docent in a red-checkered bow tie to learn more about this history of this impressive building. The library was constructed on the site of a reservoir that the neighborhood’s population had outgrown in 1895.  John Merven Carrère and Thomas Hastings won an architecture competition for their classical Beaux-Arts design, marble facade, and library lions.

There are three stories inside the library with marble steps and designed rooms for specific subject matters. The library does not have circulating items but maintains a democratic system of free public use of all research materials. Any individual can request access to historic documents, global periodicals, or research their genealogy. 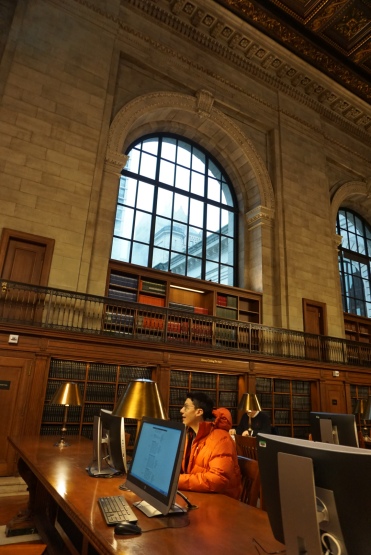 The children’s room is also home to the original Pooh Bear belonging to the real Christopher Robin Milne in 1921 as well as his other stuffed animals Kanga, Piglet, Eeyore, and Tigger. These characters inspired his father A.A. Milne to write a bedtime story for Christopher called “Winnie-the-Pooh.” 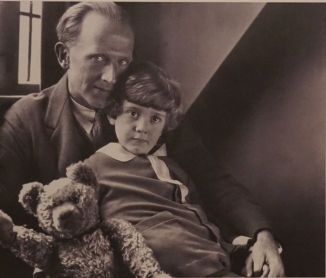 We commenced our daytime adventures with a look at the vendors of Bryant Park’s Holiday Market and watched as a Zamboni pushed water in a circle on the ice rink in the pouring rain. All in all, it was a good first day navigating the neighborhoods on the island of Manhattan. This sculpture of two figures kicking was our mental landmark for Pearl St. where our hotel was located when we got out of of the subway station. It’s always good to know where you are in the world! 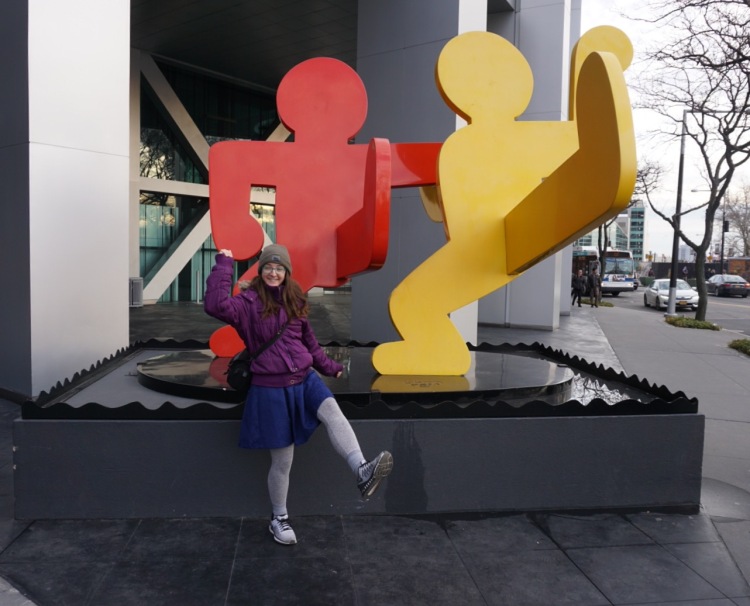