It’s true origins are unknown, but as early as 2001, footballers were experimenting with a new sport. FootGolf, as it has come to be called, is a combination of a round of golf played with a soccer ball. The first official tournament was held in the Netherlands in 2008 and has continued to advance around the world. In the American FootGolf League, there are over 500 courses and counting in the 48 United States, District of Columbia, and Puerto Rico. What was once a popular activity played in local parks has become a professional international sport. (American FootGolf)

We had the pleasure of visiting a FootGolf course in Lansing, Michigan at “The Falcon.” (http://www.hawkhollow.com/the-falcon-foot-golf/)

The owner was offering a Labor Day Weekend special for $8.00 each plus a $1.00 soccer ball rental. He went over the course rules and gave us his phone number should we lose a ball in a water hazard. The Falcon is a a nine-hole course shared by golfers and footgolfers alike. There are three different tee off lengths per hole including an adult and youth length with the traditional golfing tee behind. We were told to kick from the closer distances so as not to scuff the grass for the golfers.

Derek set up his ball at the adult tee length and kicked a long drive to the fairway. It’s been awhile since I’ve played soccer as a kid so my drive was not nearly as impressive. Slowly but surely, I kicked my ball along until I made it to the green to putt in at 7 strokes on the first hole. 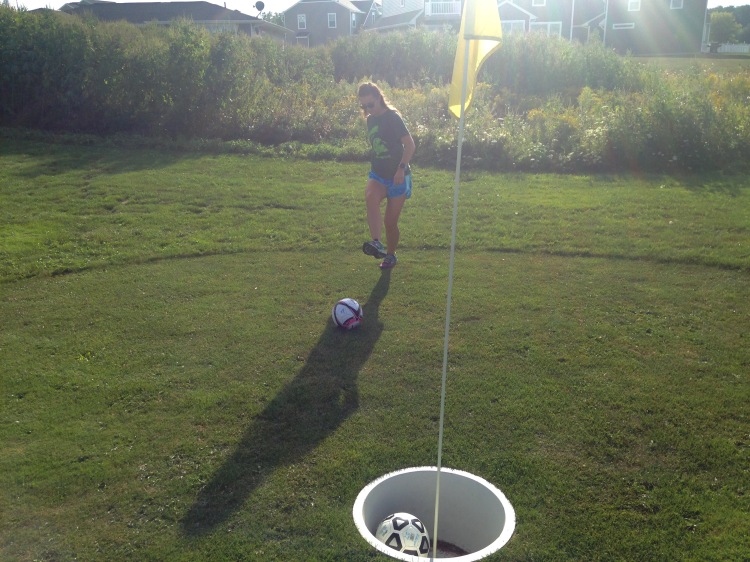 As the game progressed, I decided to kick from the youth length to level the playing field while Derek continued the longer distance. I also modified my game by running through the ball to build momentum instead of walking up to the ball and kicking it. This felt closer to a soccer game where players typically continue running and I was able to make some much better drives with fewer strokes. 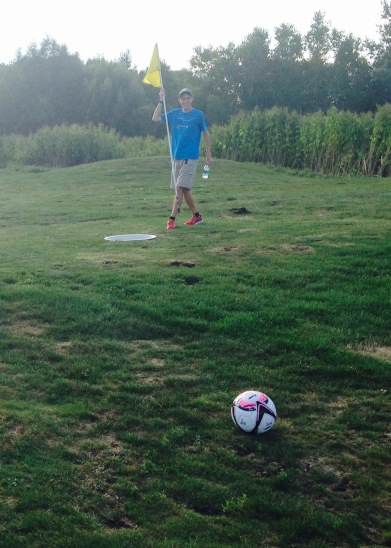 They say that “time flies when you’re having fun” and it wasn’t long before the sun began to set as we approached our last few holes. 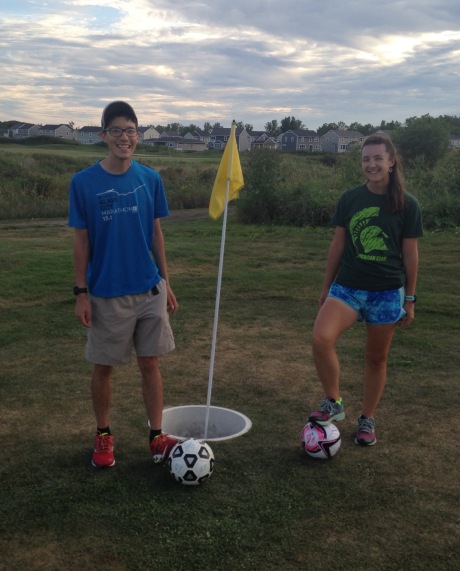 FootGolf happened to be a truly enjoyable game. I find it incredible that sports continue to be invented when combined with other sports into new games. Putting into a soccer-sized hole was one of the unique aspects of the FootGolf game, but there are always new sports to be discovered such as Pickleball, Quidditch, Toe Wrestling, or even Ostrich Racing, just to name a few.  (Unusual Sports Around the World)

2 thoughts on “The Pleasantly Peculiar Sport of FootGolf”