In the heart of Detroit, Michigan on a “Sunday, Bloody, Sunday” of Labor Day Weekend, we witnessed music legends pour their souls into songs over 30 years old energizing a stadium of fans hanging onto every note. We experienced an enlightened transformation into U2 fandom after attending this fantastic concert. Prior to selecting concert-day tickets on Ford Field’s website, I did not necessarily classify myself as a U2 fan and was not completely sure if I knew the songs on the set list.  The irony of this scenario was that for two people who do not follow U2, we recognized  most of their songs as soon as they began to play them or when it cut to the chorus. This says quite a bit about U2’s level of legendary fame over decades on the international stage.

Our Detroit concert experience began with the security line into the Lions’ stadium followed by a pregame meal in our seats as we awaited the warm-up band to take stage. Beck opened the show with a 45 minute set energizing the floor crowd who had been standing for hours to claim close proximity to the stage walkway. We were surprised to see that much of the stadium seats remained vacant during the warm-up show as they lingered the hallways picking up dinner and drinks. We liked Beck’s set but it was clear that the stadium was waiting for the main event. Over an hour passed between Beck’s show and U2’s entrance for the stage set-up. In the meantime, we scored a ticket upgrade from our seats in the back to a side balcony overlooking the stage.

The very moment that human forms walked onstage, the stadium went wild despite the low lights hiding their identities. The wide screen spanning the end-zone flashed a scene of a beautiful landscape as the band rocked their first chords. It seemed like everyone rose to their feet singing along with their fearless leader, Bono.

They played 21 songs for a full two hours including the entire Joshua album. Some of our favorite songs from the album were “I Still Haven’t Found What I’m Looking For,” “Where the Streets Have No Name,” “With or Without You,” and “Red Hill Mining Town.” The LED full screen portrayed deeper meanings to many of the songs by displaying scenes of humanity close to their hearts. In-between numbers, Bono spoke to the audience about standing up for the oppressed, women’s rights, and supporting our military. One of his quotes from the night included, “Dr. King: In a time of terror, keep us tolerant. In a time of fear, keep us faithful. To justice. To love. To liberty. To community. Detroit.” 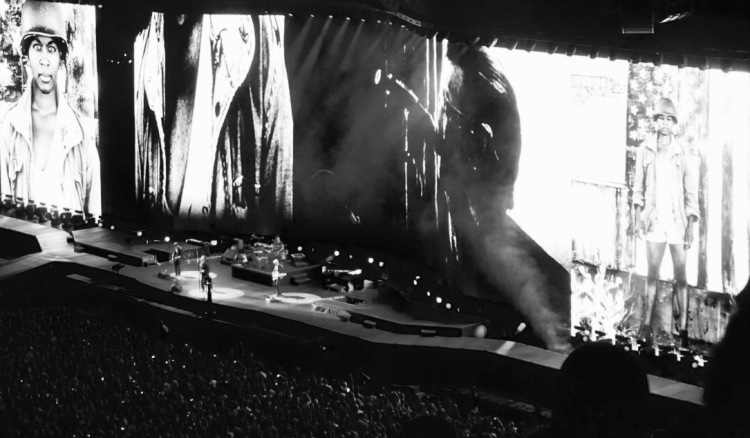 It wasn’t until over halfway through the show that the visual display changed from landscape scenes to a full screen, high-contrast image of Bono’s iconic profile singing live. His crowd appeal grew from a tiny spec on a distant stage to a stadium-sized personality looking into the eyes of each and every fan.  It was clear that he left it all on the stage putting everything he had into the music. “Red Hill Mining Town,” specifically, continues to replay its haunting melody in my mind with the image of a community brass band playing behind Bono’s screeching vocals. “Hanging on…You’re all that’s left to hold on to. I’m still waiting. I’m hanging on, you’re all that’s left to hold on to.”

The band played right into the Encore without rest, each one exploding the crowd into chaotic bliss. We knew every one of these songs including “Beautiful Day,” “Elevation,” “Vertigo,” “Mysterious Ways,” “Ultraviolet (Light my Way),” and “One.” U2 left with the message of looking out for others and that each one of us could do a part to make the world better. Bono asked that we support the victims of Hurricane Harvey and reminded us that we are all “one” together. They made us feel like we were a part of something greater than ourselves even though we had only shared the experience of a rock concert.

“I know the melting pot and everything. The whole tangle of stories and faces and places that is America. But sometimes sometimes the melting pot can go wrong. Take, for instance, this instrument (harmonica). Made and invented in Germany. Perfected in these United States. Now murdered by the Irish in Detroit.” 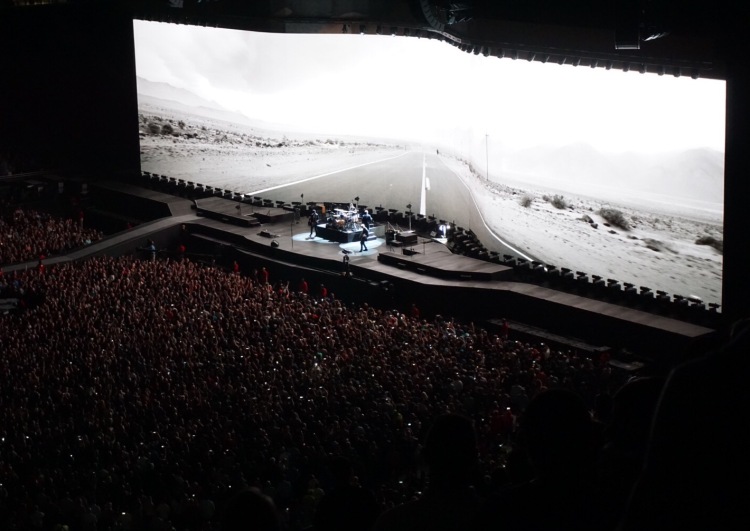