Everything changes with perspective. The view from above is both exhilarating and terrifying. Winding roads and pitch-black tunnels are followed by panoramic vistas blanketed in a sea of blue and green. While I can get lost in my imagination immersed on a forest hike, the view from the clouds lightens my soul. The Blue Ridge Parkway is a 469 mile non-stop drive from the base of Virginia’s Shenandoah National Park through North Carolina’s Appalachian Blue Ridge ending just north of Cherokee, NC at the Great Smoky Mountains. It is considered the longest and most narrow National Park in the world.

The parkway began as a project of Franklin D. Roosevelt’s administration under the jurisdiction of the National Park Service. Several agencies under the New Deal worked together to construct the parkway over a period 50 years. There are 27 vehicle tunnels, built to reduce excessive cuts in the mountainside, most of which were dug by hand. While dynamite and compressed air drills were used in the pre-war era, overall, very little machinery was used with the intention of providing manual labor jobs during the depression years (“History and Culture,” National Park Service). 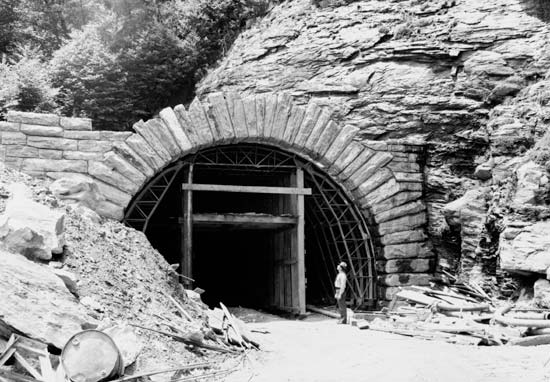 Driving the Blue Ridge was an unforgettable experience for us. We entered the parkway on mile post 384 at park headquarters in Asheville to get a map and find our bearings. After conversing with the park ranger of our relative distance to Grandfather Mountain, Craggy Gardens, and Mount Pisgah, we decided to start on our journey south toward Graveyard Fields for a loop hike. As the driver, I had to concentrate on sudden curves in the road with narrow shoulders. Out of the corner of my eye, I would get a glimpse of the view and then feel slightly uneasy turning right alongside the edge. Traveling through consecutive tunnels took steady hands and headlights. 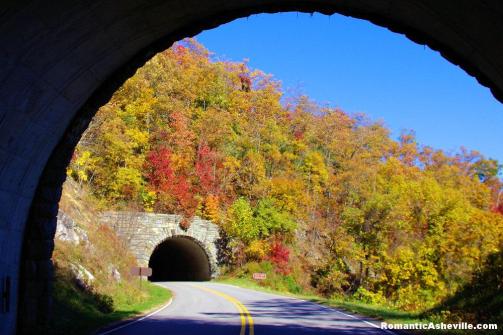 Each tunnel has its own name including Grassy Knob, Ferrin Knob (#1, #2, and #3 back to back), Young Pisgah, Little Pisgah, and Frying Pan, just to name a few. The Pine Mountain Tunnel continued on for over a quarter of a mile in complete darkness. We took frequent pit stops at the mile markers along the way for a break to take in the mountain views. 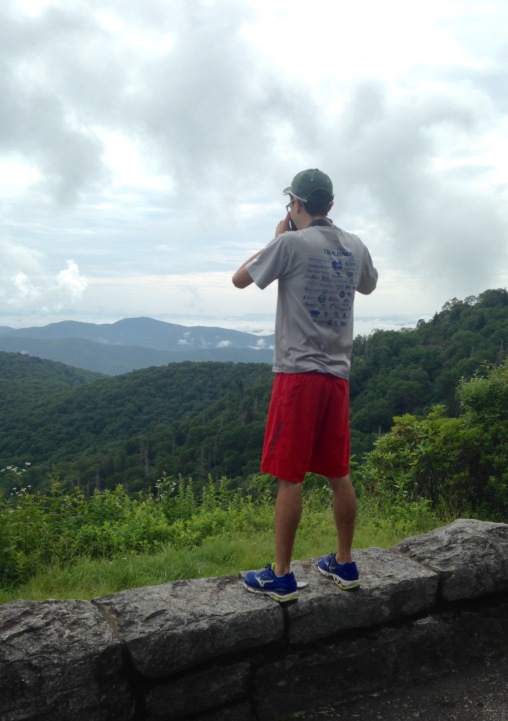 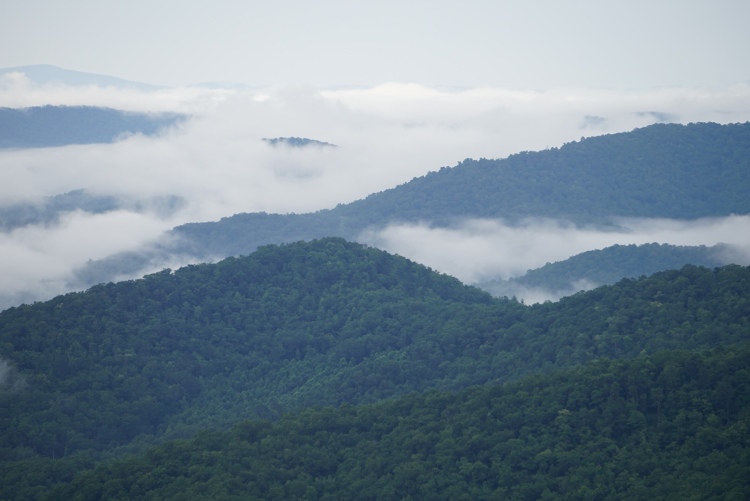 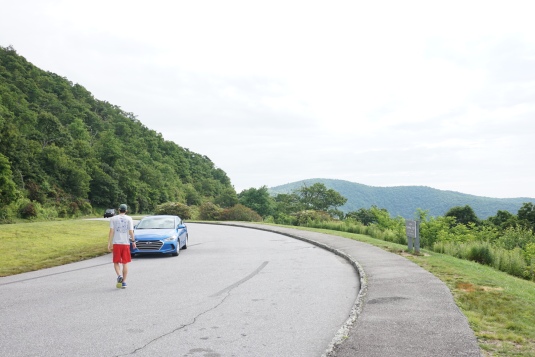 This little guy perched on the car for a long grooming session while we were taking pictures. 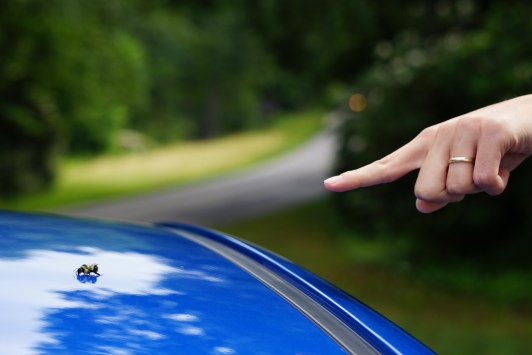 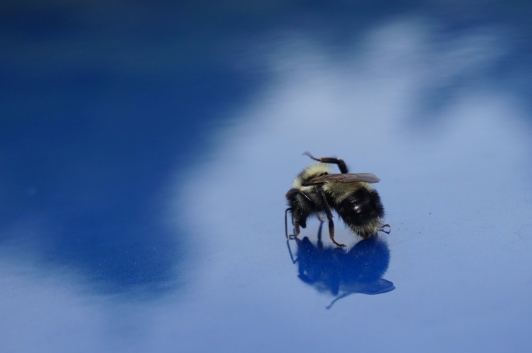 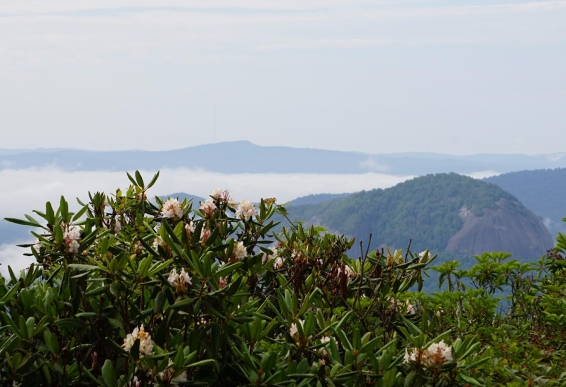 At one point on the journey, I noticed a creature on the right-hand side making its way out of the woods and onto the road. While decelerating, I thought to myself, “Hmm, that’s a really big dog…” Oh, no it wasn’t! I came to a complete stop for a bear cub to gallop across the road! Mama Bear had to be close behind so we continued on with a sigh of relief.

By the time we reached Graveyard Fields at mile post 418.8, we were ready for a hike. We knew that it would was a moderate loop trail but we brought our hiking poles and shoes just to be prepared for less than ideal conditions. 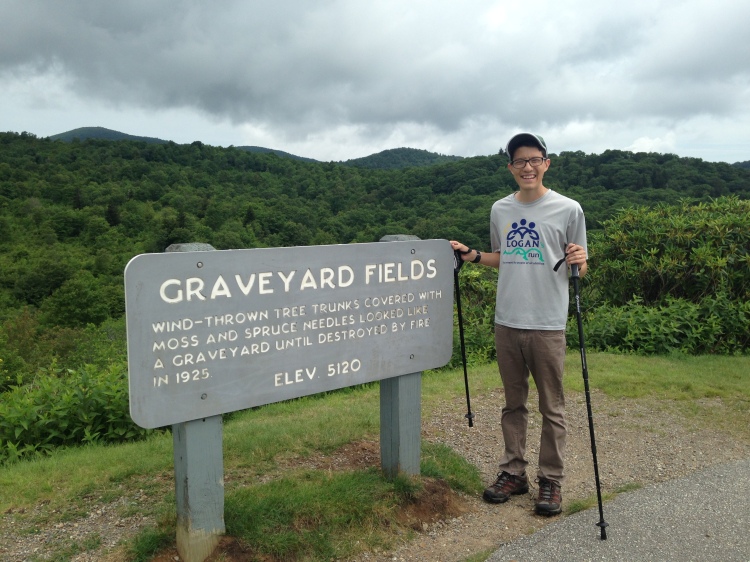 Graveyard Fields gets its name from the barren landscape of stumps similar to grave stones. Many of the trees collapsed from high winds hundreds of years ago and were then logged in the 1920’s, followed by an intense fire in 1925.  Today, it is a large valley contrasting the mountain peaks of the Blue Ridge with wildflowers as far as the eye can see in late spring. While we missed rhododendron season ending in June, we were happy to venture off the parkway into nature. The trail began with stairs from the parking lot to a wooden bridge crossing Yellowstone Creek. We used our poles to walk out onto the rock for a few photos on the creek. 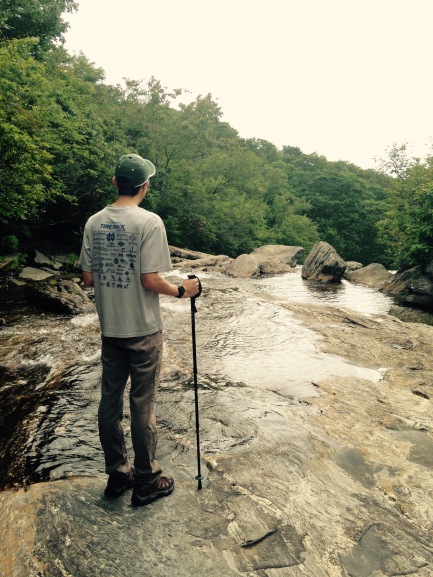 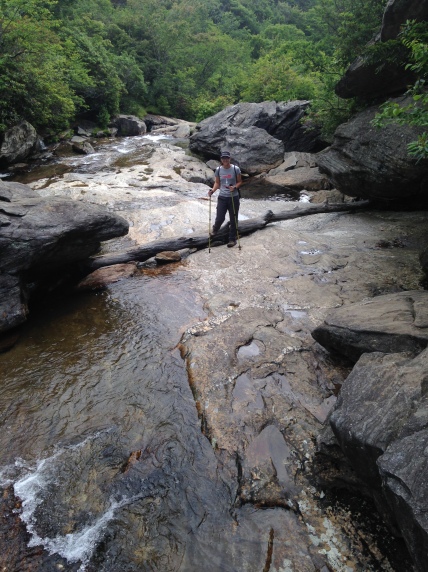 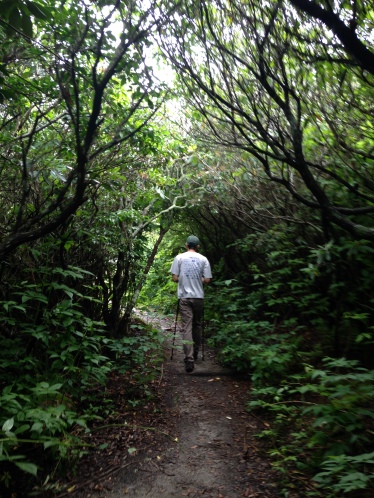 The trail was easy to follow with signs directing to the waterfalls and Graveyard Fields loop. There were areas of small trees and open meadow fields. It had rained earlier so our hiking poles were useful for slopping through the soggy areas. It wasn’t long before we finished our 4 miles and found ourselves back at the base of the staircase. 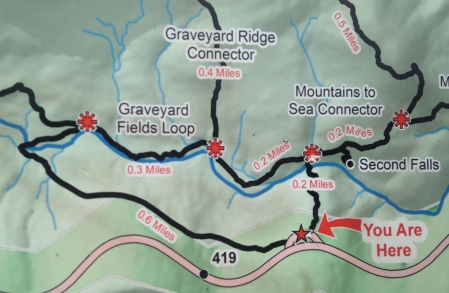 When finished with our hike, we carried on with the scenic parkway drive back to Asheville. There were quite a few cyclists powering the inclines of the parkway along with the cars. I can’t imagine riding this route from the climbing elevation to the increased speeds on declines. We took our time to visit at the overlooks along the way, our heads in the clouds. The thick, blue haze was an incredible majesty to experience. 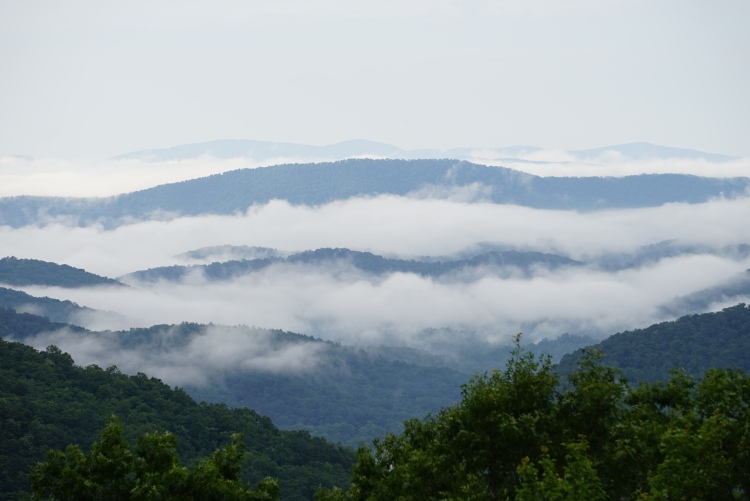 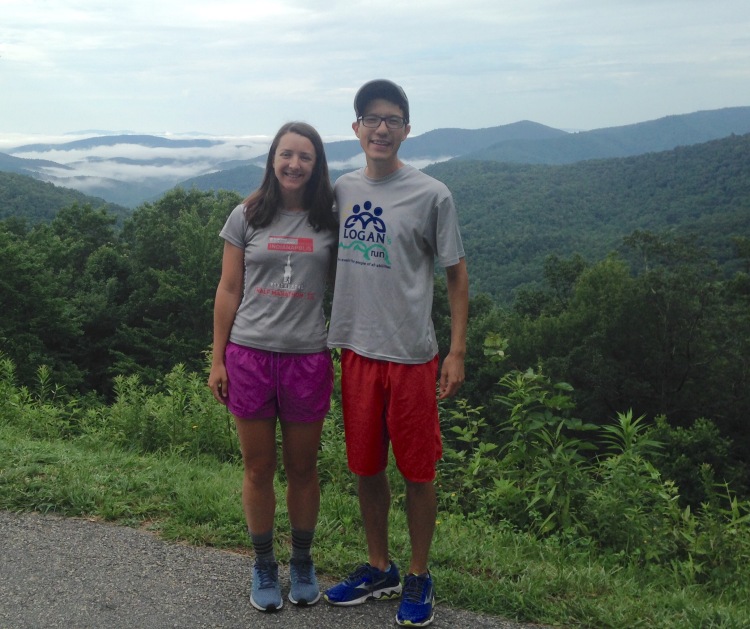